Used tyres clogging up landfill could be hitting the road again thanks to a Palaszczuk Government funded recycling project.

“The disposal of used tyres is a national problem but Queensland has the opportunity to be the leader in this recycling strategy,” Mr Bailey said.

“The Palaszczuk Government is partnering with Tyre Stewardship Australia to develop and trial specifications for the use of crumbed rubber in road asphalt applications.

“The stage 1 research found that crumbed rubber in spray seals can lead to improved road performance, now we want to see if this is also true for asphalt. 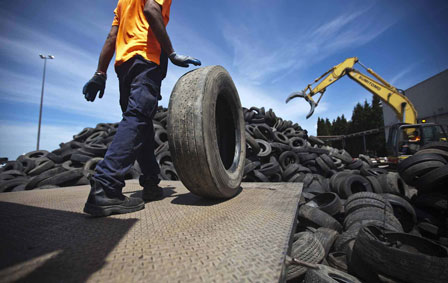 “We are about to enter the second year of a four year study into tyre recycling, but road asphalt applications have already proven successful in Queensland trials.”

“Every year in Australia more than 51 million tyres reach their end of life and only 16 per cent of these tyres are recycled, with most ending up stockpiled or dumped in landfill.

“The previous LNP government de-regulated tyre storage, leading to a re-emergence of tyre stockpiling and a reduction in the flow of waste tyres into the Queensland market.

“The Palaszczuk Government is committed to finding innovative solutions when it comes to waste.

“From the end of this year, Chip Tyre will also crumb old tyres for road-based projects, preventing even more tyres from ending up as landfill.”

In addition, the Palaszczuk Government is also considering the feasibility of banning tyres, along with timber, green waste and concrete from disposal at landfills in a bid to boost recycling rates and market opportunities for these materials.

Dr Miles said while Queensland householders would still be allowed to take these items to the tip, alternatives to putting them in landfill would need to be offered.

“A disposal ban won’t affect residents, however they can always help us by making sure old tyres are not illegally dumped.”