A Melbourne-based tyre recycling specialist has become the first Australian company ever to be named an Edison Award finalist. Green Distillation Technologies, which has developed a destructive distillation process for transforming end of life tyres into carbon, oil and steel, is a contender for an award in the Energy & Sustainability category. The firm doesn’t have long to wait to discover if it has landed a gold, silver or bronze award – winners will be announced at an event in New York on 23 April. 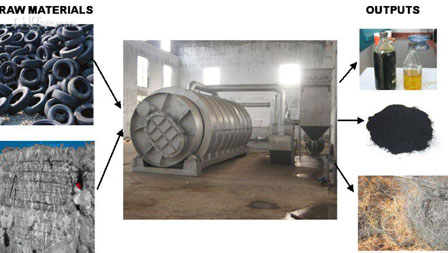 Destructive distillation uses controlled heat to reduce whole tyres to their constituent elements. These then reform into oils, which are distilled and collected. Carbon is the most abundant element in tyre rubber and is delivered up in a highly-pure powder form. Steel that is used in tyre manufacture is collected clean and unchanged. Green Distillation Technologies says the process bears some resemblance to pyrolysis in that both use heat and air exclusion, however destructive distillation differs in a number of ways. While oils produced from a pyrolysis process typically begin to separate from the moment they are manufactured, Green Distillation Technologies claims that oils from its process do not separate: “We have samples from more than three years ago that are still ‘whole’.”

The Australian firm reports that its process is entirely emission free as although exhaust gases result from the oil burnt to generate the heat needed during the process, some of these gases are directed back into the heating circuit while the remainder are passed through a lime bath scrubber where the dioxides of carbon and sulphur are converted into calcium carbonate and sulphate, leaving only nitrogen and water vapour to be released into the atmosphere. All vapours from the process are contained within the system and condensed.

Green Distillation Technologies’ director Trevor Bayley states that strong demand exists for all three materials that result from the destructive distillation process, adding that the the company could sell the oil “many times over.” He told one Australian publication, GovernmentNews, that a company which imports two billion litres of fossil fuel and diesel into Australia a year was interested in acquiring the entire annual oil output of the Green Distillation Technologies facility in Warren (New South Wales) – eight million litres.

The Warren plant is located near the pilot facility where Green Distillation Technologies began testing its process in 2009. The company aims to have the facility completely operational before the end of 2015, at which point it will be capable of processing 19,000 tonnes of tyres annually, an amount representing around three per cent of the end of life tyres generated in Australia each year.