he recovery of energy and materials from used tyres is big business. According to a report by the World Business Council for Sustainable Development, in 2008 around one billion End-of-Life Tyres (ELTs) were being produced globally each year. A further four billion were estimated to be held in stockpiles and landfills. Around the world it is estimated that some 1.5 billion new tyres are produced annually.

Figures published by the U.S. Rubber Manufacturers Association estimate that the U.S. – the world’s largest producer of ELTs – generated 291.8 million tyres in 2009. With an average weight of 33.4 pounds (15.1 kg) that equates to some 4.4 million tonnes. According to statistics published by the European Tyre & Rubber Manufacturers’ Association (ETRMA), in 2010 Europe produced around 2.7 million tonnes of ELTs. 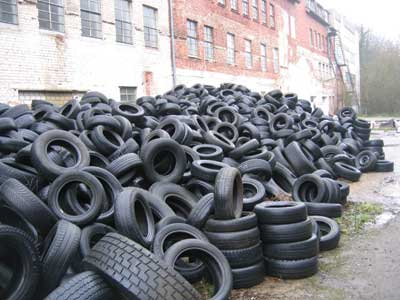 With so many ELTs being produced, as well as the huge stockpiles from the past, waste tyres pose many potential dangers. They can contaminate groundwater, harbour disease carrying mosquitoes in pooled water and they are not only flammable, but once ablaze, extremely difficult to extinguish.

Often the result of arson, fires at tyre dumps are not uncommon. In 1990 Hagersville, Ontario was the scene of one of the worst tyre fires in history. As a mechanised army of fire fighters struggled to gain control of the situation, for 17 days 14 million tyres packed onto the 11 acre site spewed toxic clouds of thick black smoke into the air.

According to the New York Times, in addition to the toxic fumes, around 158,000 gallons (600,000 litres) of oil was released by the melting rubber was collected from the site. Chemical pollutants, suspected to have been caused by the operation to extinguish the fire were also found in the aftermath of the blaze.

In a separate incident an underground dumpsite in Wales, thought to contain around 9 million tyres, burned for an astonishing 15 years following its ignition in 1989.

Because of the hazards associated with scrap tyres, nearly all developed countries regulate their disposal. In the EU, while no single directive or regulation targets ELTs, the Landfill Directive banned them from being disposed of to landfill whole in 2003 and in 2006 banned even their shredded remains from landfill.

In the U.S. 38 states ban whole tyres from landfills, 35 states allow shredded tyres to be landfilled, 11 states ban all tyres from landfill, 17 states allow processed tyres to be placed into monofills (a landfill designated for a the disposal of a single material) and eight states have no restrictions on placing scrap tyres in landfills. According to the U.S. Environmental Protection Agency (EPA), 48 states currently have laws or regulations which specifically deal with scrap tyres.

In the UK, to promote more robust standards in the collection and disposal of end-of-life tyres, and to help eradicate rogue operators, in 1999 the Tyre Industry Federation launched a voluntary initiative, the Responsible Recycler Scheme (RSS). Under the scheme tyres are stored, collected, recycled or reprocessed in line with all UK and UE legislations. Independent audits and full traceability mean that tyres handled by RRS member companies can be tracked throughout the disposal chain. Retailers usually pass the associated costs of the scheme onto the customers, with a disposal surcharge attached to the purchase of a new tyre.

In 2004 the Tyre Recovery Association (TRA) was formed to support the RRS. All TRA members are fully accredited, which guarantees that all tyres collected, recycled or reprocessed by them are disposed of or reused appropriately.

The programme has gone on to become the largest of its kind in Europe and currently handles some 45 million used tyres every year. Other countries including Germany, Switzerland, Austria and New Zealand operate similar voluntary systems, as well as many U.S. states.

According to the World Business Council for Sustainable Development’s Tire Industry Project, which has published a framework for the effective management of ELTs, a typical tyre contains 30 types of synthetic rubber, eight types of natural rubber, eight types of carbon black, steel cord, polyester, nylon, steel bead wire, silica and 40 different kinds of chemicals, waxes, oils and pigments – quite a cocktail.

Containing such a plethora of materials, tyres present a wide range of opportunities. However, in addition to the potential for material recovery, the very high calorific content of ELTs has led to their widespread use as Tyre Derived Fuel (TDF) in cement kilns and energy recovery facilities.

Using traditional recycling techniques, granulated rubber recovered from waste tyres can be used variously as an aggregate, in tiles, adhesives, asphalt, sports surfaces, and extruded rubber products, to name but a few of its uses. And in terms of energy recovery the natural rubber fraction of the tyre can be considered as a renewable energy source.

While the recovery of rubber, steel and energy from a potentially hazardous waste stream is certainly a big improvement over the not too distant past, increasingly a number of projects around the world are looking to ELTs as a potential source of much higher value materials.

One example of this is Dynamic Energy Alliance Corporation (DEAC), which recently relocated its headquarters from Memphis Tennessee to Dallas, Texas. The company has initiated the prototype phase of a project to validate its patent pending technologies to extract high value organic compounds from waste tyres. DEAC’s process involves using pyrolysis to process ELTs with the production not only of energy, but of five marketable products – recycled carbon black, pyrolysis oil, fuel and extracts, a high BTU gas and steel.

The process the company is developing melds two technologies that it recently acquired licenses for, the Terpen Kraftig (TKF) Fractionator and Pyrolytic Augmentation.

The Pyrolytic Augmentation technology includes a series of specialised chemical compounds, which when combined within a pyrolysis plant are intended to enable the decomposition of the tyres to occur at lower temperatures – which would be a critical energy-saving benefit.

According to DEAC, a reactor technology included in the license allows it to recover additional high value organic compounds during tyre processing by changing the chemical reaction that’s part of the de-vulcanization process used to convert the tyres’ rubber into valuable products.

“The intellectual property includes a class of catalysts new to this industry but with exciting potential to improve the economics of waste tyre processing,” explains Dr. Earl Beaver, chief technology officer of DEAC.

“The lower temperature enabled through the catalysts should allow for lower energy costs, lower maintenance costs and higher outputs of the most valuable liquid products and carbon black from tyre pyrolysis,” he continues.

The TKF Fractionator process will capture the friable materials in the pyrolysis oil and purify them into high value organic compounds used in the fragrance, cosmetic and solvent industries – without disturbing the oil’s hydrocarbon market value.

According to the company, the TKF processes, as adapted to its specifications, would produce up to 20 individual components at purity levels that are in high demand.

The process would consist of a series of unit operations functioning at a narrow range of temperatures, pressures, and volumes – which DEAC anticipates to yield the separation needed to maintain the purity and value of the products. Some of the 20 materials would be made in high purity for use as feedstock for downstream products, while others would be synthetic versions of natural products such as flavours, extracts and essential oils.

While the technology is still in the prototype phase, Charles R. Cronin, Jr., DEAC’s chairman, is confident: “We believe these combined processes have the potential to produce more energy than the sum of the energy used to make the original tyre plus the energy expended to recover the products. These technologies may have the ability to transform the waste tyre industry from a landfill or rubber products business into a specialty chemical business.”

Cronin added that the additional value will soon be validated in a lifecycle analysis.

Elsewhere, the TyGRe project, made up of a number of commercial and academic European organisations, is exploring the possibility of utilising the solid by-product, or char, from the treatment of ELTs with pyrolysis or gasification.

According to TyGRe, which has received funding from the European Community’s Seventh Framework Programme, the char produced by treating waste tyres in these processes has a very high carbon content which has been tested in the past as a semi-reinforcing filler for new tyres or as an active carbon.

The main idea behind the project consists of redirecting the gasification process towards material recycling by coupling a second thermal process, dedicated to the plasma synthesis of silicon carbide (SiC), to the preliminary gasification of ELTs. SiC, also known as carborundum, can be bonded to form extremely hard ceramic materials and is widely used in automotive applications for components such as clutches, as well as by the electronics industry in LEDs and other products.

Based in Redcar in the North East of England, PYReco is planning a facility which will use pyrolysis to breakdown tyres into high tensile steel, carbon black, diesel oil and syngas without producing any waste. Initially the diesel oil and syngas will be used to generate electricity for the national grid, while the carbon black will be used to make new tyres and other rubber products. Upon completion the facility is expected to process 60,000 tonnes of tyres per year, reaching 120,000 tonnes at full capacity.

“They depend heavily on the gate fee subsidies provided by the retailer. This has led to the majority of uses for the end of life tyre being limited to flooring for pony paddocks, garden mulches, playgrounds and a base for asphalt. The greater majority of tyres still end up in combustion kilns and landfill under the concealment of ‘landfill-engineering’,” he adds.

According to the company, tests prove that an average weight passenger car tyre can be reduced to more than 2.5 kg of valuable carbon black, over 19,000 Btu of gas, 1 kg of steel and 2 litres of oil.

While there are still some concerns surrounding illegal dumping or exporting of ELTs, the high recovery rates both in the U.S. and Europe are encouraging. However, in common with other waste streams, the greatest environmental and economic benefits from the treatment of ELTs lie furthest up the waste hierarchy.

Given the expanding global vehicle base, and the consumable nature of tyres, prevention is probably unattainable. Indeed, for the foreseeable future the number of waste tyres being generated globally will continue to grow. And for passenger car tyres, reuse options, such as retreading, are limited.

While the use of tyres as TDF is certainly better than landfilling or stockpiling, there are many interesting projects on the horizon which offer the potential of recovering not only energy or low value materials, but a wide range of high value materials and energy.

Around the world such projects are numerous. Not all will be commercially successful, but there are simply too many to think that none will make it. The date may not yet have been set, but the way in which waste tyres are treated looks set for a revolution.