More than 3,500 Pyrolysis plants that recycle wasted and scrap tyres to separate carbon black, steel and cheap fuel for furnaces and boilers are fighting for survival, as the government has restricted the import of used shredded tyres only for use as industry fuel. 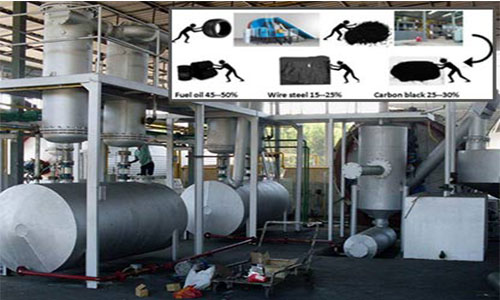 Use or wasted tyres as industry fuel is considered a serious environmental hazard the world over and even burying them in landfills is hazardous, according to Farooq Iftikhar, president of the Lahore Chamber of Commerce and Industry. An underground dumpsite in Wales thought to contain nine million tyres burned for over 15 years after its ignition in 1989, he added.
He said that the Basel Convention signed by Pakistan issued guidelines for environmentally sound management of used and waste pneumatic tyres, advising signatories to encourage disposal of used or wasted tyres first through retreading so that they could be reused, and then through recycling, which can be achieved through the process of pyrolysis. The third alternative is energy recovery through tyre derived fuel.

To ban imported of used tyres for recycling through pyrolysis is against WTO rules and the Basel Convention, which consider recycling of scrap tyres as a better option than their use as tyre derived fuel, he added. Iftikhar said that the 350 pyrolysis units produce a large quantity of derived fuel from the process and supply it to furnaces and boiler units as a replacement of furnace oil at half the price. Mazhar Hakeem Goreja owner of a Pyrolysis plant said Pyrolysis is a thermo chemical decomposition of organic material at elevated temperatures in the absence of oxygen (or any halogen). It involves the simultaneous change of chemical composition and physical phase, and is irreversible he revealed.

He said used tyres’ import cut into at least two pieces was allowed until 2011-12 to industry and commercial importers at 20 percent import duty for use as tyre derived fuel or recycling. In 2012-13 the previous government restricted the import of these tyres for use in industries as TDF only. Around 20 Pyrolysis units obtained a stay against this restriction from the courts and are still importing scrap tyres, but at 20 percent duty, while cement industry its largest importer pays 10 percent duty. Some units do manage to buy scrap tyres from the cement units but most of these units are closed or work after they collect enough locally discarded tyres.

Goreja said the owners of Pyrolysis units have imported state-of-the-art machines from developed countries to ensure that the entire process is performed in a closed environment to prevent pollution. He said almost all the 350 units have the same capacity. He said each of these units have a capacity to process 1000 ton of scrap tyres in 36 hours. He said the carbon place retrieved after the recycling process is sold to cement mills that use it in their kilns as fuel. The steel wire, he added, is disposed to the steel furnaces and the derived fuel is disposed of as substitute fuel for units run by furnace oil. He said there is a ready market for this fuel as it is 50 percent cheaper than furnace oil and has the same BTU value.

“We save a lot of foreign exchange by recycling scrap tyres,” he said, adding that due to inconsistent government policies the further process of purifying carbon black to a level could not be initiated. The process could be used in production of tyres. He said in other countries the carbon black retrieved through recycling is processed and sold to tyre manufacturers, while Pakistan uses this expensive raw material of tyre in its crude form as a fuel.