The massive mountain of unwanted tires in Seth Ward could be gone within a year after Corpus Christi-based NeoWaste opens a planned recycling plant in Plainview.

Company representatives already have met with the Plainview-Hale County Economic Development Corporation and are negotiating to acquire a five-acre tract the PHCEDC owns at 1535 Industrial Blvd. “It’s a perfect site to build our Tire Pyrolysis Plant,” Bartee said at Friday’s session.

According to its website, NeoWaste was founded by Bartee and Marky Hooper in May 2015. It utilizes the pyrolysis method for recycling tires. It involves heating whole or shredded tires in a reactor vessel containing an oxygen-free atmosphere and a heat source. In the reactor, the rubber polymers break down into smaller molecules. These smaller molecules eventually vaporize and exit the reactor. 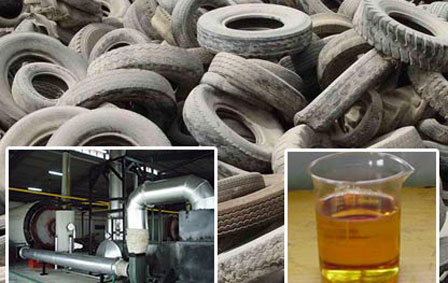 The vapors can be burned directly to produce power, or condensed into a liquid, generally used as a fuel similar to diesel. The process also produces syngas, which will be captured and used to power the plant itself. Other byproducts include carbon black and wire steel.

Bartee assured commissioners that the process is extremely efficient with relatively no emissions nor waste.

Bartee and Altemus said the facility planned for Plainview would be able to process between 24 to 30 tons of junk tires per day, or between 2,646 and 3,307 tires depending on size.

“We’ll be set up to handle any size tire,” Bartee said. “There will be a tire grinder for passenger car tires, and a cutter to quarter larger tires so they can go into the grinder, which will turn out 2×2-inch rubber squares.” Those rubber squares will be stored in an area screened from public view until processed in the reactor vessel.

Bartee said the NeoWaste facility could be open in Plainview within four to six months. Once operational, the million-plus tires now abandoned at the Tyre King facility at 34th and Wood could be processed and the entire problem remediated within a year.

The facility is projected to employ 20-25 technicians along with four to six managerial/supervisory positions.

NeoWaste is a wholly-owned subsidiary of Innovative Plasma Technologies.

“We are planning to set this up as a showplace as our first location,” Bartee said. “To show off to people interested in a franchise enterprise.” The company, he adds, is working with PHCEDC and city officials to create a reinvestment zone and secure tax abatements and other incentives.

The recycling facility will be designed to remediate plastic and medical wastes as well as tires, thus keeping those materials out of landfills.

“This definitely will be a great benefit for this area,” Precinct 4 Commissioner Benny Cantwell said, noting that the county has been facing hauling costs of $80 per ton taking waste tires to Denver City, which now is the closest tire recycler.

Precinct 2 Commissioner Mario Martinez added that those involved in the company have a good reputation. “Pete Laney brought them to us,” he said.

Commissioners could discuss possible incentives for the facility at its regular session Monday.

Other agenda items include:

–Confirm a resolution authorizing the annual county grant to Hale Center Senior Citizens for its program to deliver meals to the homebound.

–Consider a request from the Salvation Army to set up a kettle for Christmas donations outside either the courthouse or courthouse annex.

–Cast votes for nominees to the Hale County Appraisal District board.

–Approve the purchase of a laptop computer for the County Clerk’s Office for elections.

–Consider the sale of tax foreclosed property at 616 Highline Road in Hale Center.

–Hear a request from Sheriff David Mull on personnel and the purchase of two vehicles.