Reducing the number of discarded tires found in ditches and vacant lots in North Little Rock is the aim of a new city law that will take effect Aug. 1, city officials said last week.

The North Little Rock City Council’s approval of the ordinance Monday establishes regulations for the proper storage and disposal of used and scrap tires, a problem that is considered not only unsightly but also in some instances creating health and fire risks.

The ordinance was introduced for the first time at Monday’s council meeting and passed on an 8-0 vote. The law won’t go into effect until August to give the city time to educate tire dealers about it. 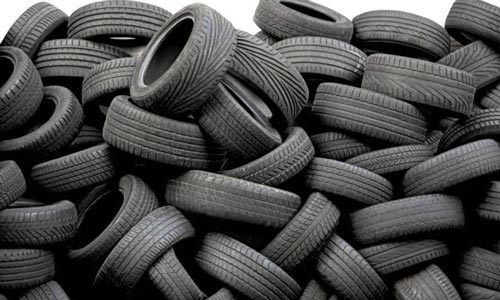 “This was born out of an attempt to do something positive about tires showing up on vacant lots, in city right of way and in roadside ditches,” said Danny Bradley, the city’s chief of staff and its former police chief.

He said 350-400 scrap tires are estimated to be picked up each month by the city Sanitation Department.

“On River Road one time there were 40 tires just stacked up in piles,” Bradley recalled. “That’s not coming from a home mechanic. We believe because of the quantity of used tires the city was picking up that they had to be coming from used tire stores.”

There are 20 tire dealerships in the city with licenses to specifically sell new or used tires, according to the North Little Rock city clerk’s office, although nine of those sell only new tires.

State law requires stores that sell new tires to participate in a regional recycling program through the Arkansas Department of Environmental Quality. Davis Rubber Co. in Little Rock picks up used tires from those dealerships and recycles them at no cost to the stores. The program is paid for by a $2 tire-disposal fee charged whenever a customer buys a new tire.

“They can participate, but they’re not required to participate, even though there’s no charge to them,” Bradley said. “So we thought, let’s regulate the used tire dealers to have them be a part of the recycling effort, in order to allow them to be able to dispose of these tires in a legal and safe manner.”

Tim Wylie, co-owner of Discount Tire and Brake at 6001 John F. Kennedy Blvd. and of two other tire stores, said his stores participate in the recycling program already. A “danger for a dealer,” however, is when someone wants to buy used tires for salvage, he said. Store managers are instructed to be sure those buyers have permits that allow them to take the tires for proper disposal.

“Some of the used tires we have probably do have some salvage value, but the majority would not,” Wylie said. “So what are they [the buyers] going to do with the majority of them?

“We’re careful and, legally we are required to do it, but we feel also like we’re morally obligated to know where those tires are going to end up.”

North Little Rock is the first in the state “that we’re aware of” to pass an ordinance regarding waste tires, said Environmental Quality Department spokesman Katherine Benenati.

“Proper disposal of waste tires is an issue across the state,” Benenati said. “If the ordinance works to ensure waste tires are taken to the appropriate collection sites and disposal sites, then it’s a good thing.”

While the city ordinance mainly deals with the proper disposal of used tries, it includes strengthened regulations on the storage of tires, which can be a health risk by attracting mosquitoes and vermin, or can become fire hazards, said North Little Rock Chief Fire Marshal John Pflasterer.

“If a building catches fire, then a big pile of tires catch fire, there are a lot of city resources needed to get that fire out and then deal with the runoff and the burned tires,” Pflasterer said. “I think in the long run will give us a little more teeth in our enforcement and in our ability to enforce the rules. The end result is, hopefully, less scrap tires for the city to pick up.”