Tyres are being dumped secretly all over the country, poisoning the environment and wasting economic opportunities, recyclers say.

Dave Youngson of Ecoretainer said he knew of tyres dumped in mangroves and off cliffs.

Despite various attempts to improve the ways Kiwis dispose of tyres, Mr Youngson said tyres that could be recycled locally were still being dumped or sent to unregulated furnaces in Asia which spewed out filth.

Ms Rose said many in the industry were upset a planned and mandatory tyre recycling scheme had stalled.

She said the Tyrewise scheme would thoroughly track how tyres were disposed of. 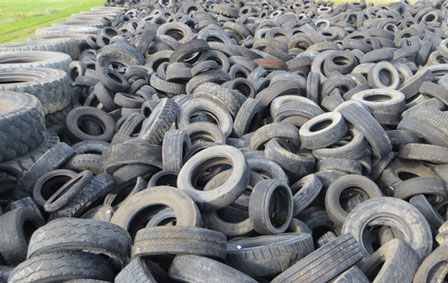 Tyrewise had a business plan, was ready to go, and just needed the Government’s rubber stamp, she said.

The dumping situation was as bad as ever, she said, with used tyre stockpiles lurking wherever unscrupulous collectors felt like dumping them.

“The real issue is it’s a bit of a hidden problem,” she said. “What we do know is that very little go to legal landfill or consented landfill…somewhere around 60 per cent is being illegally dumped or stockpiled.”According to 3R, that would equate to about 2.4 million car tyres and 600,000 truck and other tyres every year.

Ms Rose said stockpiles totalling hundreds of thousands of tyres were well-known in the King Country and Taupo but it was anyone’s guess how many illegal dumps existed nationwide.

Ms Rose said she could only presume the Ministry for the Environment had since the last general election put tyres on the back burner as it focussed on housing and water issues.

“The Ministry itself is by all accounts fairly under-resourced and it has frequent restructuring — and that doesn’t help as well when you’re trying to work with them in a commercial perspective.”Mr Youngson said some tyre collectors who picked up old tyres from retailers and other sources were not disposing of the products properly.

“Where the dumping problem comes in is that people who’ve been collecting the tyres say, ‘well, I’ll take them away for $1.50 a tyre’,” he said.

“In the small hours when you and I are asleep, they get tipped over a cliff and they get chucked into mangroves, swamps, disposed of wherever.”Mr Youngson said he’d already advised the Environment Minister, Dr Nick Smith, to declare end-of-life tyres a “priority product” under the Waste Minimisation Act.

Dr Smith saw tyres as “less of an issue from a waste minimisation point of view than of farm runoff and chemical disposal” and other problems, he said.

Tyre dumps existed in East Tamaki, the Coromandel peninsula and Napier, he said.

“Even when they’re being legally dumped at the moment they’re going into landfill, which is leaching into waterways and causing all kinds of contamination.”Ms Woods said public money had been spent on a tyre stewardship programme but the issue was as “clear as mud” and the industry and Dr Smith were at loggerheads.

Last week she accused Dr Smith of “puncturing” a tyre stewardship and recycling project, but the minister rejected these claims.

On Friday Dr Smith told NZME. News Service that although no decision was made yet on a new scheme for old tyres, claims the project was canned were “just plain wrong”.

A report from his ministry was due next month, he said. The ministry would possibly recommend keeping the stewardship scheme, which included a tyre recycling initiative.