At home, at work, at the grocery store — plastic sneaks into our lives in countless ways. The ubiquitous material is undeniably convenient, but using it in such large quantities comes at a great cost to our environment.

Unfortunately, Americans generate about 10.5 million tons of plastic waste a year. Since only 1 to 2 percent of it is recycled, it either ends up in the landfill or gets dumped in the ocean. In fact, 90 percent of all trash floating on the ocean’s surface is plastic. 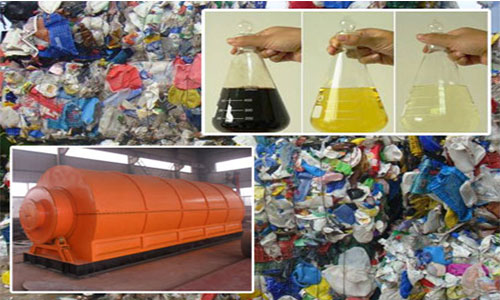 But plastic doesn’t have to be a waste. In Akron, Ohio a company is giving it a second life by turning it into fuel. RES Polyflow specializes in pyrolysis, which is basically a process that turns plastic and rubber waste into energy.

According to Chemistry World, a single RES plant operating at full capacity could convert 60 tons of plastic waste a day, which translates to 1.4 million liters (about 370,000 gallons) of transportation fuel annually. The company says they will be operational in the first quarter of 2016.

The potential of pyrolysis technology could be huge. In a study from the American Chemistry Council (ACC), pyrolysis not only reduces the tremendous amount of plastic waste that the country sends to the dumps, but it could also contribute $9 billion to the county’s economy and create about 40,000 domestic jobs, Chemistry World reports.

While turning plastic into fuel isn’t exactly the most sustainable form of energy, it can help the country curb its reliance on foreign fossil fuels. Also, as RES Polymer CEO Jay Schabel says, “We are taking a waste stream that is in abundance and readily available in every large city, and turning it into a finished product with a lot of demand, instead of it just going into a landfill.”