Billions of tons of “end-of-life” plastics could be diverted from landfills and turned into gas for vehicles.

Each ton of mixed plastic waste could be turned into nearly 200 gallons of diesel. 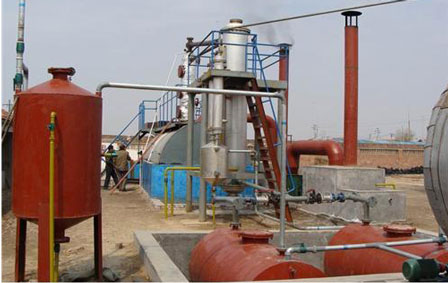 Normally, potato chip bags, beer rings, gooey food wrappers and other plastics that cannot be recycled go directly to the dump. But improvements on an existing technology could divert billions of tons of “end-of-life” plastics from landfills and turn them into gas to run cars and trucks.

Called pyrolysis, the technique is being advanced by more than a dozen U.S. and foreign firms, some of which are producing synthetic crude oil or ready-to-drive diesel. If these plants are successful, junk plastic could replace imported oil as a source of cheap, sustainable fuel for the future.

The EPA says Americans dispose of 48 billion tons of plastics yearly, and only recycle 7 percent of that total. Engineers at Cynar, a tech firm outside Dublin, Ireland, says they can turn each ton of mixed plastic waste into 175 gallons of diesel, 50 gallons of gasoline and 25 gallons of kerosene – all ready to burn.

“We are after the stuff that would go into a landfill,” said Cynar managing director Michael Murray about his source of so-called “end-of-life” plastics. “We’re not after the good stuff that gets recycled.”

The pyrolysis technology varies slightly from company to company, but is essentially this: big heaps of junky, non-recyclable plastics are sorted out from the garbage stream, baled into giant cubes, shredded into tiny bits, and then fed into an enormous furnace. But unlike most furnaces, these high-temperature burners are fueled by nitrogen instead of oxygen, and burn in a vacuum. The process transforms the plastics into a gas, then condenses them into a liquid, which is then filtered and cleaned of contaminants, including inks and acids.

“In the next couple years, we are going to see these technologies installed and commercial availability is going to escalate,” said Greg Wilkinson, president of Third Oak Associates, a Toronto-based environmental consulting firm. “It seems almost like science fiction, but the technology is now here.”

Cynar just signed a deal to build 10 plastic-to-diesel plants throughout the United Kingdom, and hopes to open others in Canada and the United States by the end of 2012.

In Portland, Ore., Agilyx is running a demonstration plant that turns mixed waste plastic brought in from local suppliers into crude oil, which it sells to a Seattle-based refinery.

“We’ve shipped 21 truckloads of crude oil derived entirely from garbage plastic,” said Agilyx CEO Chris Ulum. “That’s 170,000 gallons of crude oil that didn’t have to come out of the ground or be imported from outside the country.”

Ulum said the biggest obstacle was scaling up the manufacturing process from a small demonstration burner to a full-scale manufacturing plant. Agilyx also had to make sure the synthetic crude oil it was producing was chemically “clean” enough for the refinery. A recent report by the American Chemistry Council found more than a dozen U.S. and Canadian firms are trying to harness plastic-to-fuel technology. Kim Holmes, a Portland-based environmental consultant and author of the report, said the pyrolysis technology to convert plastic to fuel is now getting past the gee-whiz stage. “It’s now a race to commercialization,” said Holmes.

Her survey of the field showed that crude oil made from waste plastics costs around 75 cents per gallon to produce, while ready-to-go diesel is about $1.25. At those numbers, Holmes said demand for synthetic fuels may rise under new renewable and alternative fuel standards being considered by the federal government.