Discarded rubber tires may soon find a new use. A team of researchers from the US Department of Energy’s Oak Ridge National Laboratory have come up with a method of harvesting the carbon black from them, which can then be used to create anodes for lithium-ion batteries that provide power to plug-in electric vehicles and store energy produced by solar panels and wind turbines. According to the researchers, the new batteries will perform even better than the ones we use today.

The team was led by Oak Ridge scientists Parans Paranthaman and Amit Naskar and the method they devised involves pretreating the tires and then using the process of pyrolysis in order to recover pyrolytic carbon black from the rubber. The carbon black is much like graphite, the material currently used in battery anodes. But carbon black is man-made, whereas graphite is not. 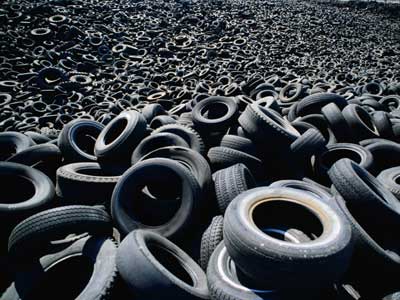 In the course of their research, the team made a small, laboratory-scale battery using the recovered carbon black material. They found that this prototype has a reversible capacity that is higher than what is possible with commercial graphite materials. More specifically, after 100 cycles the battery’s capacity measures nearly 390 milliamp hours per gram of carbon anode, which is greater than the best properties of currently used commercial graphite. According to the researchers, this is due to the unique porous microstructure of the carbon black recovered from tires, which gives more surface area than the microstructure of graphite.

The team is now developing a pilot project in order to scale up the process, while they ultimately plan to license the technology to an industrial partner. The technique they developed will most likely prove to be highly marketable, and, should the technique be commercialized, the batteries produced using it will be cheaper and more powerful than the ones used today. The added bonus of this new technique is the recycling of rubber tires, which normally end up in landfills.